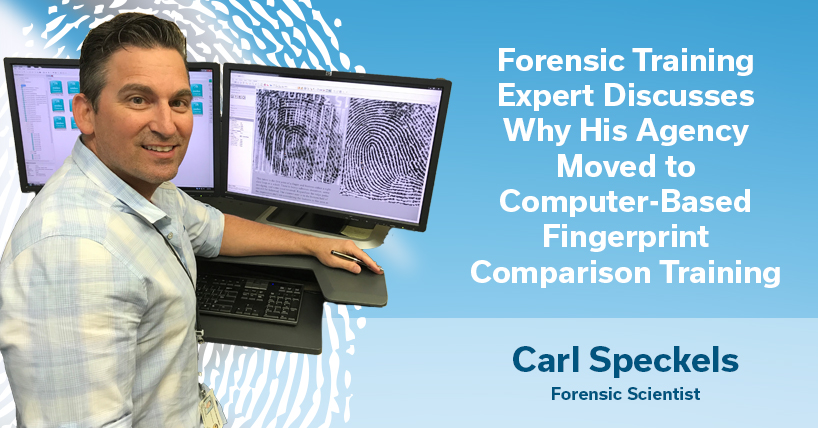 Carl Speckels has been employed by the Phoenix Police Department Crime Lab since 2002 and as a forensic scientist since 1997. With a degree in Biological Sciences, Carl is a certified latent print examiner through the International Association for Identification (IAI). He was a member of the Scientific Working Group for Friction Ridge Analysis and Technology until 2014. He is an original member of the Organization of Scientific Area Committee (OSAC) Friction Ridge Subcommittee (FRS) and currently chairs the task group charged with establishing and authoring national training standards.

What experience do you bring to the OSAC task group on training standards?

Approximately 16 of my last 19 years in forensic science have involved training employees, including a dozen years spent as the Training Coordinator and primary trainer for the Phoenix Police Department Crime Lab.

In 2013, when Mideo Systems was looking for a collaborator to assist in developing a comprehensive training program for latent print examiners, why did the Phoenix Police Department Crime Laboratory step up?

Our lab employs over 150 forensic scientists and crime scene specialists, with approximately 15 of those forensic scientists dedicated to the comparative analysis of friction ridge detail recovered from physical evidence. Given staffing size and normal attrition, we spend a significant amount of resources on training new forensic scientists. In the last 12 years, 23 forensic scientists have been trained in the Latent Print Comparative Section alone. With the support of our administration and Mideo management, we were given creative and contextual latitude to develop a comprehensive training program using Mideo’s system and well-crafted utilities.

Overall, what do you see as the biggest challenge for training in forensic departments?

Without a doubt, it is consistency — particularly as it applies to training. Training to competency means something different from one lab to the next. As a trainer and a member of a standard-setting body with emphasis in training, I know the success (or failure) of any organization rests firmly atop the pillars of its training program — especially in the specialized fields of forensic science. Trainees are only as good as the programs to train them.

You mention the pillars of a training program. What are the main ones?

First, before you even begin training, you have to hire the right people. The field of friction ridge identification has evolved over the years, and in this day and age, given the expectations of the legal system and our juries, there is the need for science backgrounds, bringing a foundation of scientific principles, testing methods, conclusions, reproducibility of results, etc.

Additionally, practitioners are expected to perform very detail-oriented forensic casework and testify to technical evidence in a court of law. They need to be trained with robust practical exercises that allow for high-repetition friction ridge comparisons. Training needs to be delivered consistently and thoroughly, with qualitative and quantitative assessments being made each step of the way.

You mentioned presenting evidence in a court of law. What role does training play in addressing the challenges of presenting latent print evidence?

Even though scientists aren’t quick to offer this up — I’ll come right out and say it: Latent fingerprint examination — and any scientific endeavor — is, at some level, subjective. Any time you have a human instrument interpreting data and producing results, there is a level of subjectivity involved. Training, when properly crafted and administered, provides an examiner with the confidence in their findings to convey the weight or impact of these interpretive results to a jury.

For instance, the friction ridge discipline, once upon a time, used to purport absolutes like, certainty and “zero error rate.” There is no such thing in science. Trainees are now trained to recognize this fact and frame their conclusions to align with scientific responsibility. For example, if the trainee is reporting or testifying to a source identification then they should be using language that communicates the weight of their conclusion, such as, “the probability that the two impressions came from different sources is so remotely low that the examiner has dismissed it.” This communicates the weight of the examiner’s expert opinion while avoiding absolutes. Understanding the importance of these distinctions comes with proper training.

What’s the best way to get new practitioners up to speed? First thing?

First you provide them with a foundation of friction ridge analysis. Training should provide an extensive scope of our history — the beginnings of this science, how it has evolved, the biological principles that underlie it, and the scientific approaches to data interpretation. These are the type of elements that live in TrainingWorks, easily accessed with a mouse click and not lost in a file drawer.

What does TrainingWorks provide that you consider essential?

First, I would have to say that it’s the versatility of the system. It allows the trainer to customize based upon their training objectives while still being aligned with the training standards. I oversee the training program and am the primary trainer — but if you took me out of the equation and plugged someone else in — the training deliverable would essentially be the same. The material provided using TrainingWorks ensures that the intended message to the trainee is the same.

Second, TrainingWorks provides so much depth and scope of relevant information. TrainingWorks already comes equipped with comprehensive lecture modules and the materials to present them; a complementing suite of study guides and tests; a massive library of comparative exercises that range in difficulty levels and a pallet of tools that allows for contemporaneous documentation that forms the bridge of communication between trainee and trainer. Additionally and encouragingly, the team at TrainingWorks is committed to staying on the leading edge of whatever new paradigms are developed in the friction ridge field, as well as maintaining strict quality control as it relates to compliance and standards.

Finally, and perhaps most importantly, this system has all of the necessary communication tools that are at the heart of the consistency issue. TrainingWorks provides a forum for meaningful exchanges between trainee and trainee. The markup, annotation and narrative tools allow trainees to capture their thought processes in the moment. So when I, as a trainer, go back to them days or even weeks later, they are able to show me how they interpreted the data with total clarity. They document what they saw, how they measured distortion, how they rated the rarity of certain features, the quality, and the usability for comparison. They have a narrative box that allows the trainee to articulate their reasoning, and markup tools that allow for demonstration of their decision-making roadmap to scientifically responsible conclusions, a virtual play-by-play of sorts. As a trainer that grades these comparative exercises, I can easily access all of this captured information and reference it against our ground truth answer keys and provide pointed feedback to the trainee.

How did your latent training program change when you moved to adding a computer-based component using Mideo?

We now use digital images that aren’t going to deteriorate or change in any way. The quality and clarity of images are forever. Prior to TrainingWorks, our exercises were constructed using hardcopy latent lift cards and after a few years of use, by many trainees, they were getting pretty beat up. Even to the point of unusable. Also, the organizational aspect is a huge advantage. Each trainee has access to the training tools on their own desktop computer rather than having to share one copy of a set of latent lift cards for each exercise. Computer vs. file drawers. That says it all.

The tools are also game changers. If you had to perform with analog versions of the digital tools — the trainee would be forced to handwrite notes, enlarge lift cards to mark them up manually, and could spend hours instead of minutes documenting details. To say it is much less cumbersome, is a gross understatement. This system allows for so much more operability, malleability, and variability.

So, with consistency as the #1 challenge, how is the progress at your agency toward addressing it?

It has improved dramatically. The program that we offer now is so much better than what we offered before — because of the tools that are available. I’m convinced that we now produce as good, if not better, trainee as we did before, and we do it in less time.

In the past, in order for a trainee to get their repetitions on latent print comparisons, we had a small file of comparative hard copy exercises, and the rest of their training came by way of completing 125 supervised cases. Because these were REAL cases — with the trainee going through it first followed by a real examiner — we never knew which cases would contain actual comparable latent prints. In fact, it wouldn’t surprise me if 50% of the assigned supervised cases didn’t have actual comparable prints. Compare that with our system now — and we are truly talking night and day. Now we have a full comparative exercise library of more than 1,200 practice latents that are available with graduated levels of difficulty — allowing the trainee to start out with less complicated cases and end with the most complex. When coupled with the hundreds of available comparison subjects (exemplars) this equates to many tens of thousands of comparison repetitions.

What benefits did you receive from this approach that were unexpected?

Time. We are producing a competency-tested forensic scientist in a shorter amount of time. Our training used to require 2.5 – 3 years. I am about to graduate three fully trained examiners — start to finish — in just under two years. I also can’t say enough about the value of the auto grading tool. What used to take enormous amounts of my time, now happens, literally, with the click of a mouse.

Beyond time, have you experienced any cost savings?

If I could only get one message out there to those in charge of training for their organization, it would be this: There is so much liability associated with the type of work that we do. Personal liability, organizational liability and not to mention, community liability as it relates to the potential danger to the public that comes with erroneously associating or disassociating a suspect to a crime. For every examiner that is improperly or insufficiently trained, there is a potential for public endangerment and consequently a lawsuit waiting to happen. The relative cost to mitigate these situations and significantly reduce these various liabilities, when compared to the cost of litigating liability, is negligibly small.

The legal system that we serve increasingly expects more of, and places greater demands on, the expert witness. The days of saying “trust me” are over. Today’s forensic scientists, when interpreting complex pattern data, must thoroughly understand the foundation of what they are doing and be able to unequivocally articulate that in the courtroom. This program provides the trainee with a comprehensive background and foundation that allows them to meet those court expectations.

To learn more about the Fingerprint Comparison Training discussed, read about TrainingWorks here.